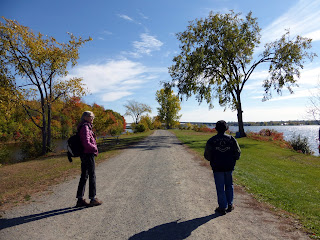 Last Saturday, October 15, the members of FEH (Fran, Evlyn, and Holly) met to see if we could do a site-specific installation somewhere along the spit in Grenville, Quebec - which is across the Ottawa River from Hawkesbury Ontario. 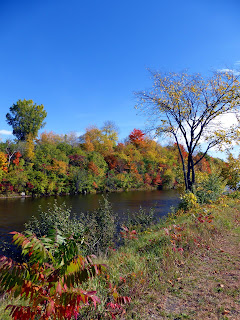 It was an absolutely glorious Fall day and the Autumn colours of the trees were at their peak. The sky was a rich blue, the air was fresh, and it was truly inspiring to look at everything as a canvas for a FEH project. 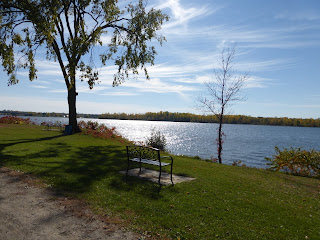 There were some delicious scenes along our walk, like this one, looking out toward the Ottawa River. 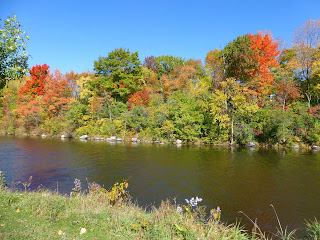 ... or like this one, looking at the reds in the trees on the Quebec shore. 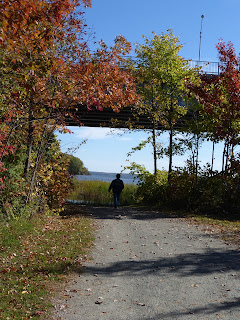 The walk along the spit took us all the way to the bridge that crosses from Hawkesbury to Grenville. 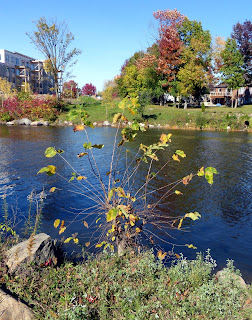 Then we spotted this interesting little bush, with a halo of branches fanning out, bare except for the one leaf each branch had on its end. 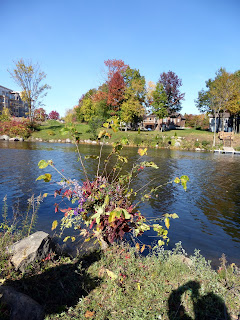 We decided to weave and wrap some Fall flora into this little bush, but carefully so as not to disturb the effect of the branches sticking up. We used vines and sumac leaves and fall flowers (especially aster) and any other bits and bobs of colour we could find. 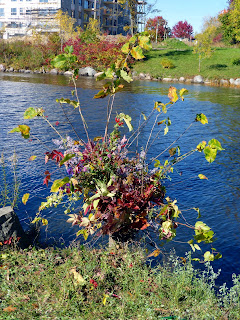 When we were finished, the little bush looked like an Autumn floral extravaganza. It was really quite lovely! And we were pleased to see that the bees liked it too - they were busy with all the flowers we had woven into the bush. 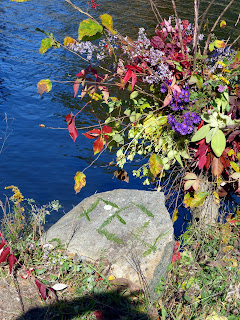 Then we signed it, using green ferns. It was hard to keep the letters F, E, and H in place because the wind kept blowing the ferns away. But we persevered! 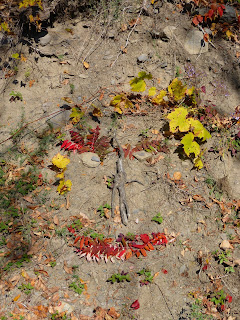 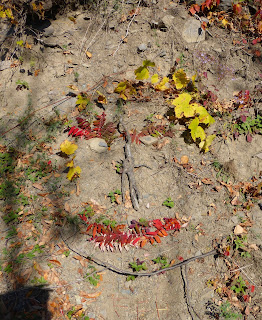 We also added some vines for hair and a branch to define the chin. Voila! a Fall face! 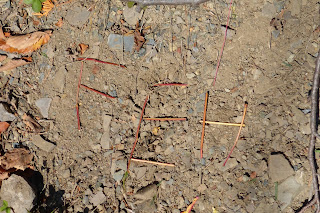 And then we signed this piece as well, using some red sticks. (As Holly said, it is a good thing none of us has a name that begins with an "S")
Altogether a really satisfying day for FEH. And a great way to enjoy a nearly perfect Autumn day!
Posted by Evlyn at 19:16 1 comments