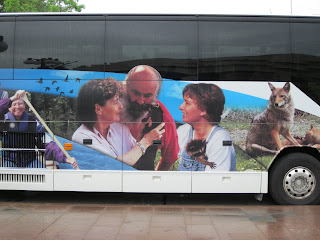 There are always lots of tour buses parked along the road in front of the Museum of Civilization in Gatineau. This evening, as I was walking home from work, I saw one that really caught my attention. As you can see, it was decorated with photographs of people and animals, all with a very "camping in the wilds" theme. If you look closely, you will see that the woman on the right has a baby racoon in the front of her overalls. And the other woman is also holding some sort of baby animal (I can't tell what it is). And there are wolves and people canoeing and lots of other things going on in this montage of outdoors-y pictures, all on the side of a bus! 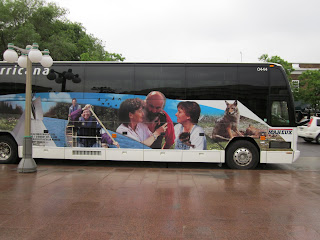 From a distance, you can see that it really is a bus and not a billboard on wheels. 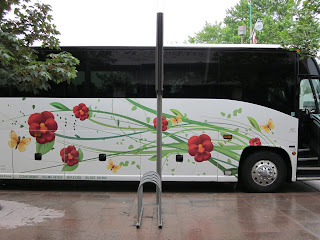 This bus was also brightly decorated, although not as spectacular as the one with photographs. As I was photographing it, a woman came up to me and said, "Isn't it beautiful?" She said she was also interested in the way the tour buses were decorated. 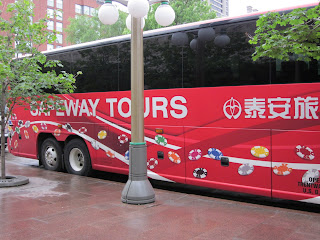 This tour bus had poker chips all along its sides. I think it is safe to bet that it makes frequent tours to casinos. 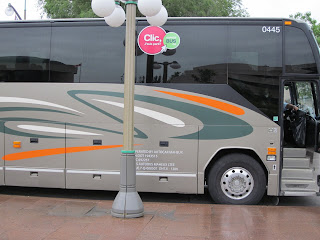 I like the simple but effective graphic on this bus. I also like this photo because, if you look closely, you can see the arm of the bus driver on the wheel inside the bus. 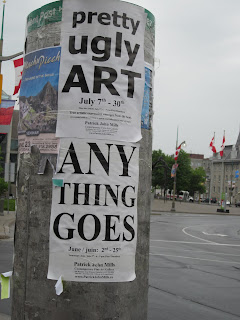 I continued on my walk home and crossed the bridge to Ottawa. While I was waiting at a red light, I saw these two signs on a post.  Provocative commentary on Life and Art, don't you think?﻿
Posted by Evlyn at 20:19

My guess is that the other animal is a baby black bear.