Guitar Music in the City 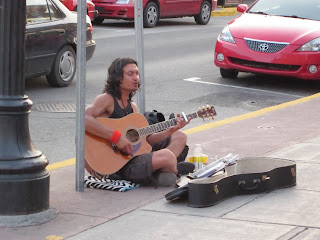 One of the pleasures of walking around the Byward Market on a summer evening is that there is music everywhere. It is like walking through an extended party, covering many blocks, with a guitar player on every corner to entertain the party-goers. This evening, I saw many guitarists playing, sometimes singing as well, like this man. He was very good and I lingered to listen for a while. 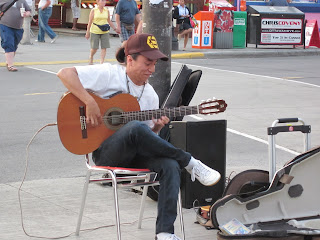 Later, I saw this guitarist, who attracted quite a crowd because he was exceptionally good. He played flamenco-style guitar and his technique was dazzling. He should have been playing in a concert hall somewhere, but here he was, on the street in the open. 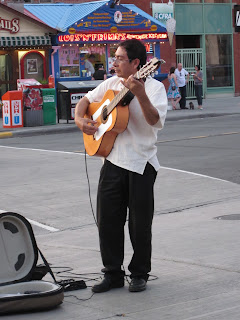 This guitarist accompanied the flamenco guitar player. They were both really amazing guitarists. I hung out on the street listening to the two of them with a crowd of other people, all swaying and moving to the music. It was mesmerizing. 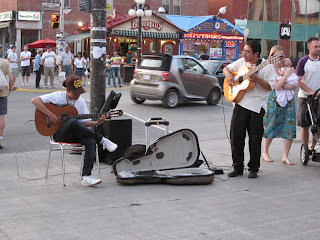 Later on, I saw other guitarists in other parts of the Market, but it was getting too dark and I couldn`t get good pictures of them. Of all the musicians I saw, these two were the best. I kept thinking of some lines from a Joni Mitchell song:

`....the one-man band by the quick lunch stand,
He was playing real good, for free....`
Meanwhile, crowds of people flowed around the players, some stopping to listen, some rushing on to other places - shopping, restaurants, home, families, lovers. And I thought of another Joni Mitchell song, where she sings, `Life in the city looks pretty to me.`
Posted by Evlyn at 19:43

There are some great musicians out there on street corners!