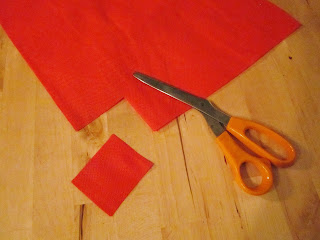 Sometimes, one just has to take a stand for what one believes in. I strongly support the students in the demonstrations in Quebec for a number of reasons. Today, I saw some people wearing the red squares that are the symbol for support of the students and decided that it was time for me to wear one too. So I bought some red material and cut out a square. 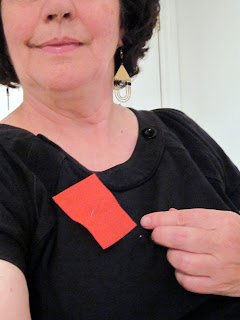 I pinned it to my shirt and now I am ready to show my solidarity. Too many students are crippled by debt after they graduate and so increasing tuition and telling students they can just take out more loans seems terribly wrong. Also, the growing gap between rich and poor in this country is a true injustice, and making education inaccessible for a large group of people is just going to aggravate this. Time to take a stand!
Posted by Evlyn at 20:10

I believe the students are focusing on the wrong problem. Especially in Quebec, tuition fees are minimal. However, living expenses for students who can't live at home really add up and summer jobs are difficult to get. There is a big disconnect between the no. of students graduating and the no. of jobs available. I don't think students are prepared for the realities of the job market. Too many students graduating with unusable degrees. I feel the Occupy movement with its focus on the gap between the top and the bottom was trying to address a more relevant problem. In my fantasies, I see CEOs salaries based on the ave. worker salary - say 10x. Then there would be incentive to pay the workers adequately. And for student protesters, vandalism is never right.

Good for you - I support the students, too. Maybe if people were less apathetic in the rest of Canada, tuition fees wouldn't be so ridiculously high outside of Quebec.

I am 100% behind these student protests. I don't understand why the rest of the country's students aren't rebelling in the same way. It's fine to say that Quebec has lower tuition costs (for native Quebecers, only) but I don't think I would ever label them as "minimal". And if they are angry over their impending increases then why are the other provinces standing around and accepting the insane tuition costs they have? It's gotten to the point where I actually had to think twice about recommending post-secondary education to my own kids and that's disgraceful.

And this whole discussion hasn't even taken into account the disgusting actions the government is trying to take to limit the abilities of the students to actually protest. It's like turning the clock back 42 years.

Wear your red square with pride - even Arcade Fire had them on for their appearance on Saturday Night Live last week!